When you read about all the things that 14 year old Ahmed Mohamed has built, he should be head of his schools science club. But I doubt his school has a science club. Probably has a prayer club thought.
After building a home made clock, and bringing it in to school to show people, instead of being praised and held up as an example, he is arrested and detained, and questioned without his parents present. The sad thing is that when he showed his science teacher, the teacher said ‘you better not show the other teachers’. So on some level his science teacher knew that the other bigoted ignorant teachers in the school would think that a brown kid with a ‘Furrener’ sounding name has bought a bomb to school. 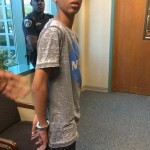 The irony is that he was wearing a NASA t-shirt whilst being questioned by police.

Still the good news is that after being searched, suspended and made to feel like a terrorist, Ahmed got a ‘note’ to his school to explain his actions….from the President of the United States in the form of a tweet from the white house.

Cool clock, Ahmed. Want to bring it to the White House? We should inspire more kids like you to like science. It’s what makes America great.

Beats “The dog ate my homework!” doesn’t it?